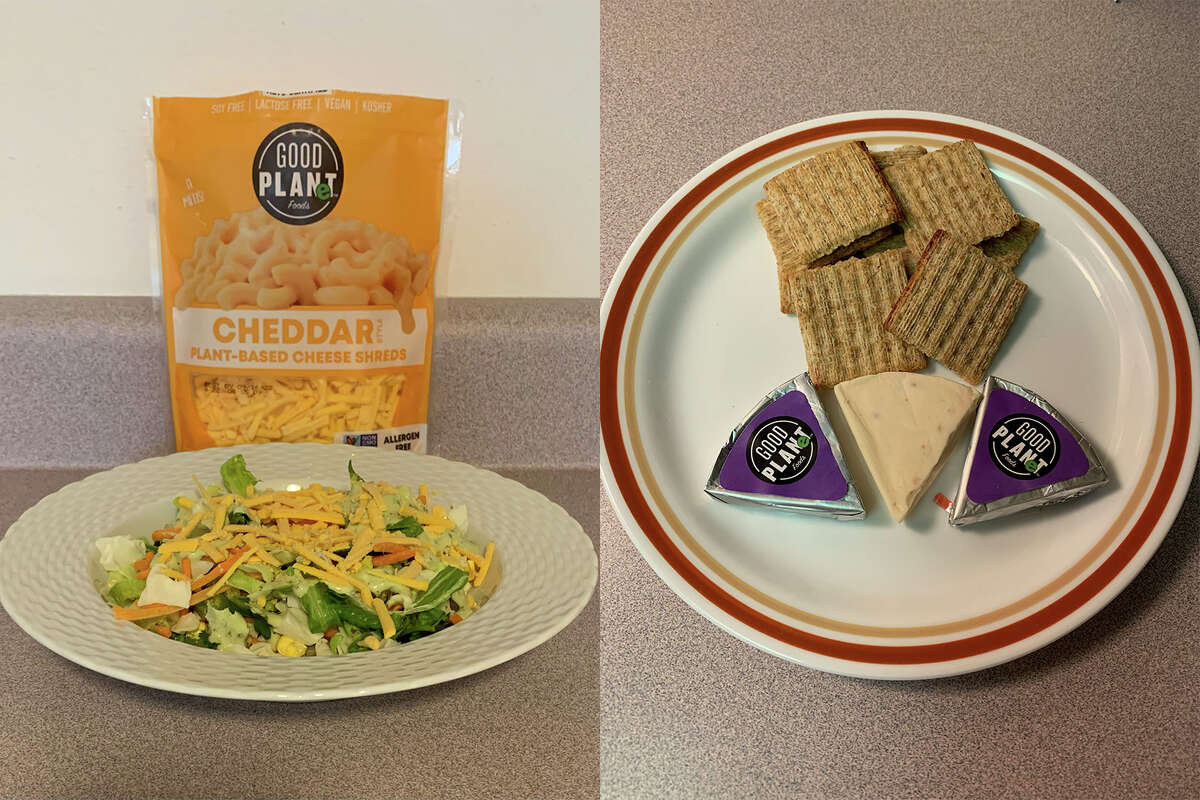 In Wisconsin, we take cheese very seriously. My state makes more than a quarter of all of the U.S.’s cheese and people even wear Cheesehead hats to football games. Throughout my life, cheese has been a more significant part of my diet than I’d ever admit to a nutritionist.

I’m also a vegetarian, with the biggest hurdle to ever becoming a vegan being — you guessed it — cheese. Whenever possible, I prefer vegan options for milk and ice cream, but I’d never found a vegan cheese that was even slightly palatable… until now. GOOD PLANeT hands down makes the best vegan cheese. With some of their varieties, you can’t even tell the difference.

I’ve tried this brand’s cheese in three forms: wedges, slices, and shredded. The wedges were the first kind I tried and are by far my favorite. I asked one of my friends if they would try a cheese and I would tell them afterward what was special about it. Hesitantly, she agreed and tried one of the smoked gouda cheese wedges.

When I asked her how it tasted, my fellow Wisconsinite said she liked it, and that it had a strong flavor. She was shocked when I told her it was vegan. We agreed it definitely tasted like a standard smoked gouda cheese.

On my own, I’ve also tried the original and pepper jack flavors. The smoked gouda is my favorite, but I enjoyed all three. The original has just a mild flavor and pairs best with more flavorful crackers. It goes well with pepper jack flavored Nut-Thins. The pepper jack cheese has an excellent spicy flavor that isn’t too overpowering.

I mostly enjoy the wedges with crackers and they make a fun addition to charcuterie boards. I work from home, but think these would be excellent for adults to bring to work or to put in kid’s lunch bags. The cheese is a bit firmer than other wedged cheeses, so it wouldn’t make a mess. The texture is similar to cheese in blocks.

The slices were my least favorite, but still good. The reason I prefer the wedges is that they have much more flavor. Still, the slices work great for sandwiches.

I was most nervous to try the shredded cheeses, particularly the parmesan. I’d tried several vegan parmesan cheeses before and liked none of them. This one was good and actually tasted like parmesan! I like to sprinkle it on top of pierogies and other pastas. The shredded cheddar tastes great in salads.

Overall, I enjoyed all of the types of cheeses, but the wedges are the most flavorful and definitely their best vegan cheese.

What is Vegan Cheese & Why Would I Buy It?

Most of the vegan cheeses I’d tried in the past were made mainly from nuts. Cashews seem to be an extremely popular ingredient. Don’t get me wrong — I love nuts. But I don’t like them when they’re pretending to be cheese. It doesn’t taste right.

Plus, if you had it at an event, you would have to make sure anyone with nut allergies knew the cheese wasn’t an option for them, which they likely wouldn’t have assumed on their own. This cheese is free from common allergens like nuts, dairy, soy, eggs, and wheat.

Some of the top ingredients in the GOOD PLANeT cheeses are potato starch, coconut oil, and chickpea protein. To me, this makes for a much more cheesy consistency than nuts.

You don’t need to be vegan to enjoy vegan cheese (although it’s obviously perfect for vegans). Anyone can appreciate the taste and it’s a great way to cut down on your overall dairy consumption. Even people with no dairy issues can feel sick and bloated if they eat too much cheese.

There are a lot of people who get sick from too much dairy, but eat cheese anyway (because it’s delicious) and suffer the consequences later. Whether you’re vegan, lactose intolerant, want to reduce your dairy intake for other reasons, or want more options for your friends, this is the best vegan cheese to try.

The Downside: There Can Be Too Much of a Good Thing

Unfortunately, you can only buy GOOD PLANeT cheeses in somewhat large quantities on Amazon right now. For example, if you want the smoked gouda cheese wedges, you need to get a pack of nine. To someone in Wisconsin, that doesn’t necessarily seem like too much cheese, but it might be for some people.

If you’re just shopping for yourself, this might not be the best fit. However, if you have a whole family of cheese lovers or are having an event, this would work well for you. For a barbeque, you might order a bunch of the slices.

Fancier get-togethers might have a bunch of wedges on charcuterie boards. Or, you might just have a lot of hungry, growing children to devour this cheese. I’ve seen brands start with large quantities on Amazon before and then later offer smaller amounts, so even if it’s too much for you, I’d recommend checking again later.

You should also keep in mind that the nutrition profile is different from that of traditional cheese. This is a replacement for the cheese taste and texture, not the cheese nutrition.

If cheese is your main source of calcium, you won’t get as much with this type of vegan cheese. You may need to adjust your diet accordingly and get more calcium through other calcium-rich foods and beverages like Brussels sprouts, broccoli, salmon, figs, or calcium-fortified almond milk.

I’ll definitely be eating more of this vegan cheese, especially with National Cheese Day being on June 4. I’m not giving up regular cheese just yet (who can resist when a restaurant says something is made with Real Wisconsin Cheese?), but I’ll always keep some GOOD PLANeT cheese in my fridge.

The cheese wedges, in particular, will always have a special spot in my fridge. I like the idea of cutting down on my dairy consumption for the planet and my health and this is the best vegan cheese to help with that. Most importantly — it’s tasty.